On November 8, 2015, Plovdiv for the first time marked the “European Wine Tourism Day”. Official organizers of the event were the Tourism Council – Plovdiv and Plovdiv Municipality.
In 2015 Plovdiv Municipality was accepted as a member of the “European Network of Wine Towns” – RECEVIN, which includes more than 70 cities in Europe. Among them are centers of wine tourism such as Monte Carlo, Siena, Beja and Rhodes.

As part of the program, visits to two wine cellars were organized in the Rodopi collage: TODOROV COMPLEX Brestovitsa, VILA YUSTINA wine cellar Ustina village. This was in the form of a free transfer with a tasting included, starting at 11:00 and 15:00. The removal of the passengers was carried out with two tourist vans with a total of 32 seats, provided by VILA YUSTINA.

The event was launched with the opening of a retrospective photo exhibition entitled “SEVEN YEARS OF YOUNG WINES” on the central street. From 18:00 to 19:00, the dance program “DANCES, TRADITIONS AND WINE” was presented at the Roman Stadium with the participation of DILANKA FTA and Geo Milev.

On November 5, a journalistic tour was organized with a visit to the BODY TODOROV COMPLEX Brestovitsa and the VILLA YUSTINA wine cellar during which the “European Wine Tourism Day” was presented, the opportunities for wine routes and the forthcoming “Young Wine Gorge” “. The tour was carried out with the support of Hebros Bus. 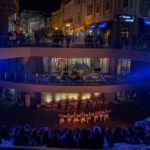